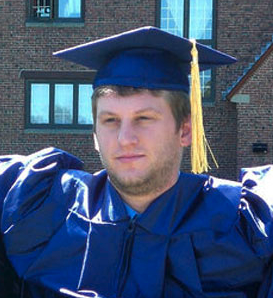 In December 2009, our good friend, Gary “2E” Nealey was diagnosed with acute myeloid leukemia (AML), a cancer that starts inside bone marrow. It is the most common form of leukemia among adults, although rare for a person his age. After a courageous six month battle, his disease proved too great. Gary was ultimately taken from us at the much too young age of 26 in May 2010

Through all of this, he showed an incredible strength and will to live and a gratefulness for each day that he was with his friends and his family. His memory, his courage, his generosity and his sense of humor will forever motivate those who had the privilege to know him and has shown through in each year of the tournament.

In the fall of 2002, 2E started his college career at the University of Maine in Orono. It wasn’t long after that along with other high school friends from Gorham, Maine, that he pledged at Phi Gamma Delta, also known as Fiji. One of the trademarks of the Phi Gamma Delta fraternity is the royal purple color on all of its flags and emblems – you may see it once or twice throughout the Tee Off for 2E website as well as the tournament.

Shortly after 2E’s passing, a large group of his Fiji brothers wanted to do something to show their support of the Nealey family. With not a lot of time to plan and a large group to accommodate, a group of about 25 fraternity brothers decided that it would be great to get teams of four to donate $20 and proceeds from returnable cans to run an “Adult Beverage Olympics”. It featured an all-day event with lawn games consisting of horseshoes, corn hole, beer pong and a few more, and ultimately the winning team was crowned, and we were able to help both the Nealey family.

A few months later at a Christmas party with many of the same cast of characters, we discussed making the tournament bigger and better, and to reach out beyond the Fiji’s and do something great to remember 2E. We organized a small team of 4 to work on setting up a golf tournament and were guided along by the superintendent of Val Halla Golf Course, and fellow Fiji brother, Toby Young. We started a Facebook page, Twitter account and reached out to family and friends through word of mouth and many, many Facebook posts. The first year was in line to be a roaring success with over 80 golfers registered. Unfortunately, the New England weather had different ideas, and our total on the makeup day in late October was just shy of 70.

We typically plan to play the tournament on a Saturday afternoon in late September and run it as a scramble to allow golfers of all ability levels to compete to win! Some of the fun events at the tournament can include an awards dinner, longest drive, closest to the pin competition, putting contest, and a raffle. Our tournament has grown every year and every fall following the event, we head up to Camp Sunshine to meet with staff and hand them our donation. 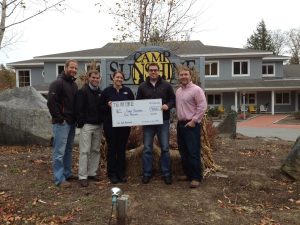 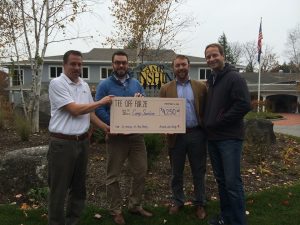 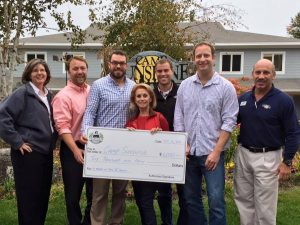 Camp Sunshine has grown to be an important part of the Tee Off for 2E tournament. Over the years, our tournament has resulted in tens of thousands of dollars being donated to Camp Sunshine’s mission. Founded in 1984, Camp Sunshine provides retreats combining respite, recreation and support, while enabling hope and promoting joy, for children with life-threatening illnesses and their families through the various stages of a child’s illness. Camp Sunshine is the only program in the nation offered year-round with the distinction of having been designed to serve the entire family in a retreat model. The program is free of charge to families and includes on-site medical and psychosocial support. Bereavement sessions are also offered for families who have experienced the death of a child from a supported illness.

The money donated goes directly to sponsor families that visit the camp. Every $2,000 donated provides a week of activities, accommodations, meals, 24-hour medical support, psychosocial services, and a myriad of therapeutic recreational opportunities to a family.